The aging process of an individual can depend on the target age range hat you are attempting to progress to. Sometimes the age can cover many decades and in that situation you must know which facial characteristics progress and which characteristics remain constant. It helps if you have photographs or references of the individual’s family at the same age that you are targeting. An example would be known photographs of the parents at age 45 if you were progressing the subject o 45 years of age. This allows you to see how the family visually and physically develops over time.

Case Example: Donald Eugene Webb is a fugitive wanted for the killing of a police officer in Pennsylvania in 1980. In 1981, he was placed on the FBI’s Ten Most Wanted list and remained there until 2007, longer than any other fugitive in the list’s history. Pennsylvania State Police requested Harvey do an age  progression of Webb with the last progression completed 2 years ago. It is believed by law enforcement that Webb is dead or no longer a threat. Case Example: Randolph Dial was convicted of the 1981 murder of karate instructor Kelly Hogan in Broken Arrow, Oklahoma. Dial, while serving a life sentence, escaped from his Oklahoma prison taking with him the assistant warden’s wife, Bobbi Parker. In 2005 Dial, along with Parker, was found in East Texas working on a chicken ranch. Dial was sentenced in 2007 to seven years for his escape from prison. The time was added on top his previous life sentence for murder. He died in June of 2007 at the Oklahoma State  Penitentiary in McAlester. During the investigation, the US Marshal’s Fugitive Unit requested Harvey do an age progression of Dial, which aided in the apprehension of the fugitive. 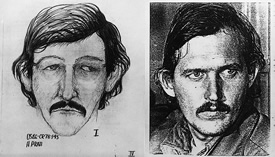 Case Example: At the request of the Cleveland County District Attorney’s Office, Harvey implemented an unusual technique for this age progression of Roger Dale Stafford, who was involved in the 1978 Sirloin Stockade Murders in Oklahoma City (for more information about the murders, please see case example under Witness Description Composite Drawing). This court exhibit reflected the original composite done at the time of the murders and progressed through several drawings to show the physical changes of the killer at the time of the trial.