Craniofacial reconstruction is a forensic technique developed to render a facsimile of how the skeletal remains (the skull) might have appeared in life.

Working in conjunction with the anthropologist and medical examiners the technique is based on soft tissue depth on various locations of the skull. The tissue depth depends on age, sex, race and body density.  The reconstructions are completed with the mouth open and the mouth closed. If the hair color and length is known, wigs are used.

A skull reconstruction provides physical similarities to aid authorities in looking for people with those similarities. It is an attempt to jar the memories of those who remember the deceased.

Skeletal cranial facial reconstruction is a valuable tool in law enforcement’s toolbox as it is used as an investigative aid and to expedite the investigation. As such, police forensic artists need to continue to develop this technique, using better tools, equipment and getting the best information from all resources. 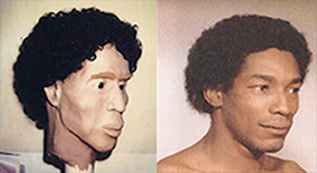 Case Example: Harvey completed this reconstruction at the request of the Oklahoma City Police Department. The reconstruction allowed the department to compare known missing persons with the skeletal reconstruction leading to the identification.

Case Example: A reconstruction of an unidentified homicide victim originating from the Collier County Sheriff’s Office, Florida. In 1978, the victim was discovered in a shallow grave near Florida State Road 29, south of the interchange with Interstate 75. If you have information concerning this case, please contact the Collier County Sheriff’s Office. 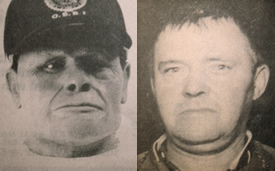 Case Example:  Mountrail County Sheriff’s Office, North Dakota, requested Harvey’s expertise regarding this most unusual case concerning the misidentification of a victim involved in a suspicious death. The victim died in a cabin fire in 1965 and, twenty-five years later, the person thought to be the dead man is seen alive. By assuming a different name and life, the supposed victim told authorities he had perpetrated this lie because of personal and financial problems. Harvey was able to complete a skull reconstruction and, with the help of an anthropologist, identified the correct victim.