Image or photo enhancement is the process of changing characteristics of an individual in an existing image. This could include mustaches, beards, hairstyles, skin complexions, body weight, nose, lips, tattoos and such. Enhancement can include other items such are vehicles, clothing, changing a black and white photo to color and removing objects from photographs such as people. These changes can be made directly on to the photograph by computer, airbrushing and/or by hand. 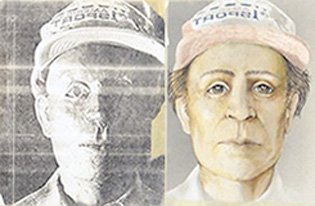 Case Example: This skull reconstruction, originating from Louisiana, was not utilized fully because of a poor photograph. Harvey duplicated the original photograph, colorized it and enhanced the facial characteristics for identification. 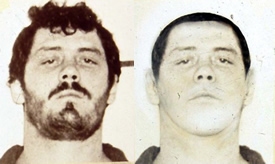 Case Example: This was a fugitive case from Oklahoma in which the suspect had altered his appearance. Fugitive teams were looking for the suspect based on a five-year-old photograph depicting the suspect with facial hair. Based on informant information, the suspect no longer had facial hair. By making the changes to the photograph and disseminating it to law enforcement, the fugitive officers were able to locate the suspect and make an arrest without incident.

Case Example: The original photograph received by Harvey was a vague still photo from video. The frame was blown up and facial characteristics were enhanced on the photograph. From this, a drawing was completed. The drawing was presented on television and the suspect was identified within an  hour.