The technique of skull tracing is done when the actual skull is not available for reconstruction, for numerous reasons (the skull is too fragile for shipment or the prosecution does not want to risk the chain of command). The same measurements are used as in skeletal reconstruction except the photograph is used in full frontal feature as well as profile with a centimeter ruler placed in the photograph. The measurements are transferred to the overlay projecting the skin dimensions at strategy points. This technique can be done quite rapidly and can project the tissue in three weights: thin, normal and heavy. Once the images are completed the drawing can be disseminated to agencies for comparison with missing persons and additional testing can be completed to verify identity. This technique is useful in narrowing the investigation to a certain, race, sex and type of physical characteristics.

Case Example: The below three examples of skull tracings are from the unidentified skeletal remains from the Green River Killer investigation. The skull tracings were completed by Harvey in the mid 1980’s at the request of the Green River Task Force. Gary Ridgway, known as the Green River Killer, has pled guilty to the murders of 48 women as part of a plea bargain that would spare him execution in exchange for providing further details to locate the remains of his victims and further details about the murders. The murders took place in Washington and Oregon. 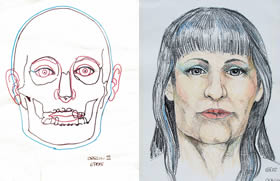 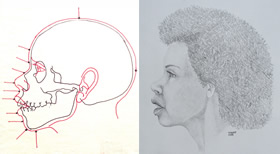 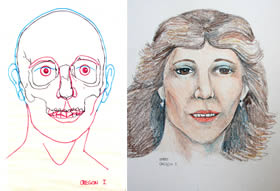