The term composite art was originally used when facial features (eyes, noses, lips, hair, facial shapes) were compiled to complete a total composite of a face that was similar to a suspect or witness of a person of interest.

Witness description drawings were basically the same technique but were drawn free handed based on an interview of a witness or victim to determine what someone might look like. The drawing is an investigative aid that will expedite the investigation, saving time and money, by narrowing the suspect list and involving the public in the investigation. It may also reflect that the investigating agency is utilizing all resources to solve the crime. Witness description drawing can be used not only to identify suspects but also identify tattoos, vehicles and other special items. A good police artist should develop additional information for the investigator helping to assist not only in a similar drawing of facial features but body characteristic, mannerisms, speech patterns and other sources of information gleamed from the witness. This information will help the investigator narrow down the field of suspects.

Below are examples of composite drawings beside photos of the subject later identified. Additional case information has been provided for further reading. 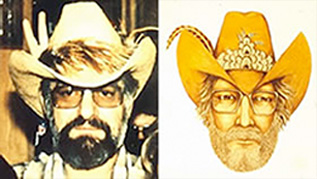 Case Example: The investigation of the disappearance of two young girls from the Oklahoma State Fair, and investigated by the Oklahoma City Police Department, involved the drawing of a suspect by two female witnesses. The drawing was done in color based on the witnesses’ clarity and to help with recall. The drawing led the investigation to Roy Russell Long who admitted he was with the children and had hired them to unload items from his truck. Since the children were never found, an Oklahoma County district judge ruled there was insufficient evidence against Long and dismissed the charges. Long died in a Wyoming prison where he was serving a life sentence for the deaths of two hitchhikers. This drawing was disseminated nation-wide and led the investigators to Roy Russell Long. 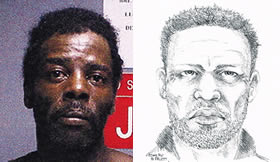 Case Example: The victim in this case left her car running outside a convenience store for less then a minute and when she returned the suspect was hiding in the back seat, forcing her to drive to the outskirts of town. Harvey was contacted three days after the assault. He completed the drawing and before leaving the police department, one of the investigators recognized the individual in the composite. Within the same day, the victim positively identified the suspect. The suspect was convicted of kidnapping, assault, robbery and rape. 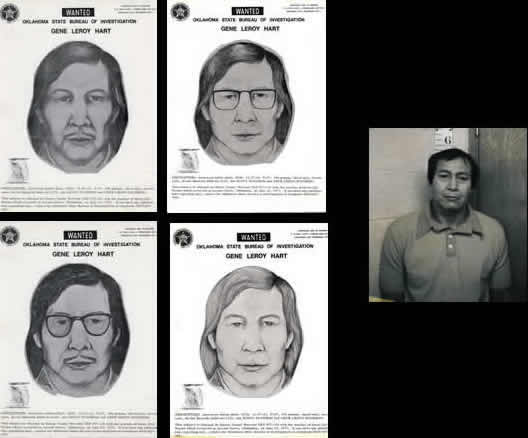 Case Example: Perhaps one of the most inconceivable and horrific crimes in Oklahoma’s history, the Girl Scout Murders forever stole the State’s innocence.

On June 13, 1977, counselors at Camp Scott, near Locust Grove, Oklahoma, woke up to a horrendous discovery. Lori Lee Farmer, age 8, Doris Denise Milner, 10, and Michelle Guse, 9, were found murdered near the Kiowa camp area. All three girls had been sexually assaulted.

Within a short time, the manhunt focused on Gene Leroy Hart, a thirty-six year old Native American born in the area. Hart had been convicted of raping two pregnant women and had escaped from the Mayes County Jail September 16, 1973. He had been at large for more than four years. Hart was able to elude capture for over 10 months and on April 16, 1978, OSBI agents acting on information provided by an informant, captured Hart in a small house in a heavily wooded area in Adair County.

Gene Leroy Hart’s trial began on March 19, 1979, and after 10 days of testimony the local jury acquitted him. He was returned to jail to finish serving the 305 years left on his rape convictions. In June 1979, during a jog inside the jail, Hart collapsed and died. An autopsy revealed that Hart had died of a massive heart attack.

The above OSBI Wanted Posters utilized Harvey’s projections of possible physical alterations that Hart may have drawn upon to avoid capture.

Case Example: The Sirloin Stockade Murders were a high-profile OSBI case in the 1970’s. The murders took place in Oklahoma City and eventually led to a series of drawings completed by a witness. Husband and wife team Roger and Verna Stafford, along with Roger’s brother Harold, were responsible for the deaths of the Lorenz family. A few weeks later, this same murder trio robbed a Sirloin Stockade Restaurant, ordering six employees into the walk-in freezer, shooting all six to death. The witness, after seeing a picture of a truck owned by the Lorenz family, remembered the suspects in the vehicle. Three drawings were completed and eventually arrests were made. Harold Stafford died in motorcycle wreck about a week after the Sirloin Stockade Murders. Verna Stafford is still in prison and Roger Dale Stafford was put to death in 1995. The above drawings are of Harold and Verna Stafford. To see the composite drawing of Roger Dale Stafford, refer to case example under “age progression”.