Historical reconstruction is the recreation of an individual that lived in the past. This can be done through the traditional methods of skeletal reconstruction or skull tracing. Projections are made with the awareness that the human body has changed its appearance over the decades. Projections to reflect the time period will also include clothing, artifacts, increased or decreased body weight and hairstyles.

Case Example: This Cheyenne warrior, known as Sandman, was unearthed by accident in 1973 by a homeowner south of Woodward, Oklahoma. The name Sandman came from where the remains were found, in a sand bed. Since 1973, his remains had been at Fort Sill and the University of Oklahoma for study.

Sandman was killed in 1837 on Wolf Creek near Woodward, Oklahoma, during the Battle of Wolf Creek, which was an intertribal war between the Cheyenne and Arapaho tribes against the Comanche and Kiowa tribes. He was buried with an extremely large number of trade items and personal effects, which reflects he was a man of importance with the Cheyenne. Because of this, it is one of the best-documented historic burials in the Southern Plains.

Jointly, the Smithsonian Institute of Washington D.C., the University of Oklahoma and the Southern Cheyenne Tribe of Oklahoma worked to piece together identifying Sandman. Throughout the project, it was the desire of the researchers and the Cheyenne Tribe that Sandman’s humanity not be lost in the process of analysis. To this end, the Cheyenne Tribe requested that Harvey do a skeletal reconstruction of Sandman in 2001. 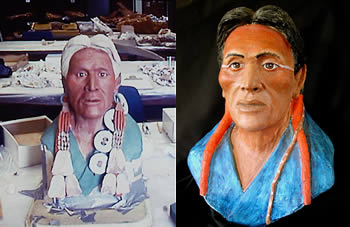 “Human life is important. It is not a matter of the present, it is a matter of life, that someone lived….sometime, somewhere. This individual contributed to us all and we should respect that spark of humanity. This man touched those he lived with and he touches us now.” Harvey Pratt

In a respectful manner, the Cheyenne warrior’s remains and possessions have now been repatriated and reburied at Fort Supply near Woodard.